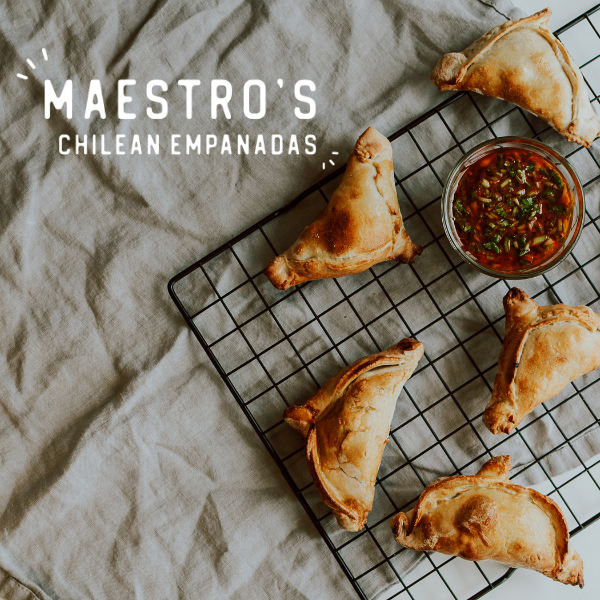 With recipes passed down through generations, Chef Don Carlos brings the taste of Chile to Edmonton.

“We all have that one dish we know we’ll crave the minute it’s gone, for me, that dish is empanadas!” says Carlos.

Empanadas, for the uninitiated, are handheld turnover pastries, stuffed with fillings – usually meat and vegetables. They’re made all over Latin America and Europe, but are especially beloved in Chile, where they’re the unofficial national dish. On holidays and other gatherings, Chileans eat copious amounts of empanadas in celebration.

Maestro’s Empanadas officially opened in June of 2020, but Carlos has been making the classic pastry for decades. The story of Maestro’s has its roots in Vina del Mar, Chile, where Carlos was taught by his uncle to make empanadas. Inspired by a passion for empanadas and the flavours of his native Chile, Carlos brings traditional Chilean flavours to Edmonton’s food scene.

“Our family has made these delectable handheld turnovers since ancient times, sharing recipes down through the generations,” says Carlos.

In Chile, empanadas are typically baked in a wood-burning oven. A traditional Chilean empanada is filled with meat and onions, along with a hard-boiled egg, olives, and raisins. Every empanada is handcrafted with care, stuffed with high quality ingredients. Starting with buttery, flaky layers of pastry, and filled with seasoned meat, the chicken and beef empanadas are beloved favourites. For vegetarians, the spinach and feta empanada is the perfect cheesy, savoury treat.

Maestro’s is committed to tradition, and their empanadas are stuffed with all the classic ingredients. All Maestro’s empanadas come with the traditional pebre sauce, a popular Chilean sauce made from coriander, chopped onion, olive oil, garlic and spicy aji peppers.

Maestro’s Empanadas, though only two years old, has made its mark on Edmonton’s food scene. We’re proud to welcome them to the 5th St. family!

Maestro’s Empanadas, though only two years old, has made its mark on Edmonton’s food scene.